How far do the laws of quantum physics stretch?

Natural science
The remarkable laws of quantum physics appear only to show up on a very small scale, even though the theory also applies to larger objects. Wallenberg Academy Fellow Witlef Wieczorek is attempting to render quantum physical phenomena observable in an object ten million times heavier than has so far been possible. 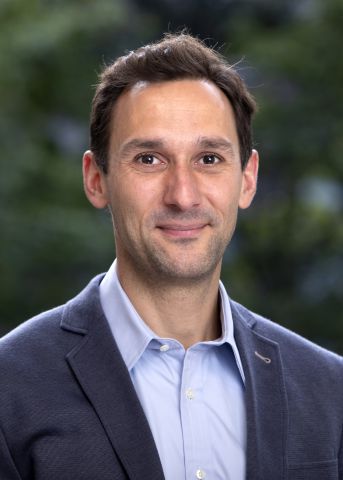 In the 1930s Nobel laureate Erwin Schrödinger postulated a famous thought experiment based on the laws of quantum physics. It presents the paradox of a cat that is alive and dead at the same time. The idea is absurd to most people, but in the world of quantum physics it would not be strange at all – it is quite normal for particles like electrons to exist in several states or several places at the same time. The phenomenon is called superposition.

But in our daily lives we never see cats, or anything else, in a superposition.

“Quantum states like superposition are highly sensitive. Even the tiniest disturbance, such as thermal radiation or kicks from molecules in the air, causes them to collapse. This is generally assumed to be the reason we don’t see them on our macroscopic scale,” Wieczorek explains.

But it is not possible to be absolutely sure. Even now, no one has managed to reconcile quantum physics – the laws explaining the microscopic world – with gravity, which governs the larger world. So there might be an unknown mechanism that invalidates the laws of quantum theory as size increases.

“That’s why it’s important to test the upper limits of quantum theory. What is the maximum size of objects that can be placed in quantum states such as a superposition?”

The current record, set in 2019 by researchers in Vienna, is a molecule consisting of two thousand atoms. With the help of a Wallenberg Academy Fellow grant, Wieczorek is now attempting to break that record, using an object ten million times heavier than the molecule – a sphere measuring one micrometer across. The sphere is superconducting – conducting current without any resistance at all.

“About 20–30 years ago no one would have dreamt of trying to achieve superposition with something of this size – it seemed impossible. But now we’re employing a completely new experimental concept. On paper, it looks like it could work.” 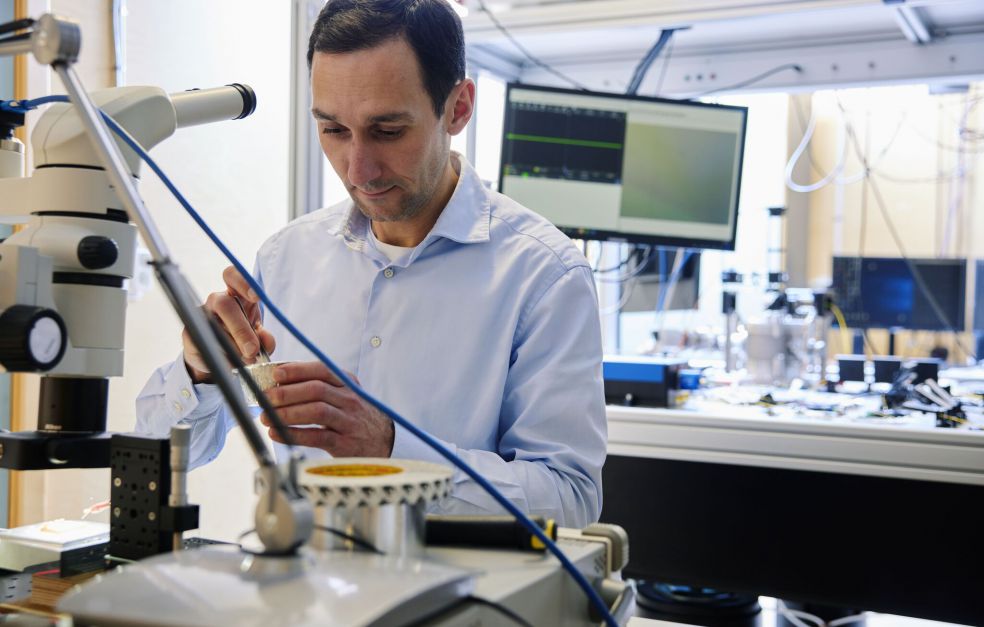 Even when he was a PhD student in Germany he worked on controlling and manipulating quantum states – at that time with photons, that is light particles. One highlight was when he succeeded in linking no fewer than six photons together in a superposition – at the time an achievement at the very forefront of research in the field. Later, as a postdoc in Vienna, he got interested in working on larger objects.

“It fascinates me to be able to manipulate the quantum states of objects that are large enough to be seen – at least under a microscope.”

Isolated from the surrounding world

The approach in his Fellow project is to minimize all known disturbances that can cause the quantum state of the object to collapse. To this end, the new experimental platform being developed by Wieczorek and his team has the superconducting sphere levitated in a vacuum at extremely low temperature.

“It is a great honor and means a lot to me that the Foundation has confidence in the work I am doing. The grant will enable me to conduct a fascinating and long-term high-risk project.”

“This enables us to decouple it as good as possible from its surroundings. A vacuum minimizes gas molecules that might collide with it, and the low temperature minimizes thermal radiation.”

The researchers use a magnetic field to make the sphere levitate. The magnetic field is designed to have a marked minimum, like a valley in a mountain landscape. This enables them to carefully control the position of the sphere – resting at the minimum. It then remains to be seen whether it can be made to exist in two places simultaneously, in a superposition. 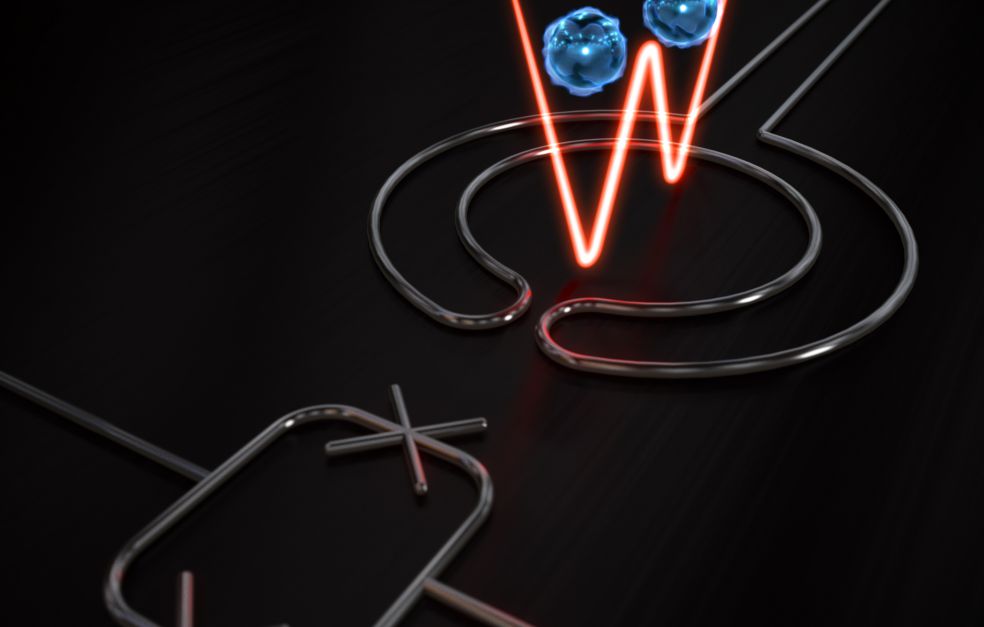 Zero and one at the same time

The fundamental building block of a quantum computer – the quantum bit (qubit) – has two states, corresponding to the zero and the one of an information bit in a conventional computer. In contrast to normal computers, the qubit can be placed in a superposition of the two states, so that it is both zero and one at the same time. In addition, the qubits used at Chalmers can be modified to influence the magnetic field landscape.

“Connecting a qubit to our experimental platform enables us then to manipulate the magnetic field and hence the position of the suspended object.”

If the qubit is in the “zero” state, the minimum in the magnetic field will move slightly in one direction; if it is in the “one” state, it will move in the other direction. The sphere, which is resting at the minimum, moves too. When the scientists then place the qubit in a superposition of the “zero” and “one” states, the minimum is at two positions simultaneously and the sphere is therefore placed in a superposition – if quantum theory applies, that is to say.

“I would be delighted if I could demonstrate that quantum theory also applies to objects this large. It really is of fundamental interest in physics. But it would also pave the way for further development of our experimental platform into an ultrasensitive sensor for precise measurements of acceleration and position,” Wieczorek adds. 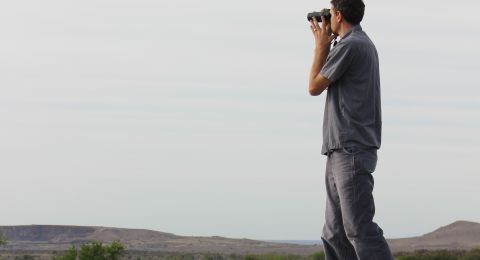 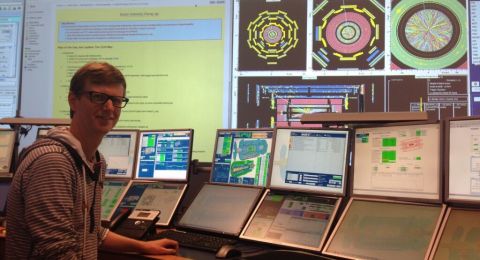 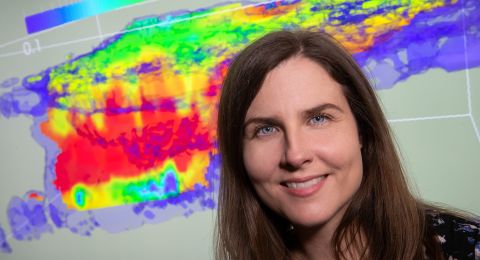