Among the basic research that Knut and Alice Wallenberg Foundation supports are several projects that in various ways are important for understanding Alzheimer's disease.

Take a look in to the brain, watch the amyloid plaques and the tau protein that kills the neurons during Alzheimer’s disease.

Alzheimer's can be influenced by lifestyle changes 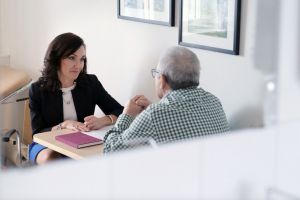 Despite the fact that there has been intensive research on Alzheimer's and other dementia diseases all over the world and for many years, there is still no cure, symptoms can only be relieved for a limited time.

Below you can find presentations on the supported projects of recent years. It is about everything from diagnosing Alzheimer's with blood tests before clear symptoms, development of microchips to the mapping and imaging of the human body's approximately 20,000 proteins.

Alzheimer's disease belongs to a group called neurodegenerative diseases, which also includes Parkinson's disease and ALS. Research on these diseases is therefore often important for Alzheimer's as well.

Blood tests helping in the hunt for anti-dementia drugs
About ten million people are diagnosed with neurodegenerative diseases every year. They cause enormous suffering and involve huge costs for medical care. At the University of Gothenburg Henrik Zetterberg has developed a method for using blood samples to detect brain damage long before it is noticeable. The aim is to improve diagnosis, but he also hopes to contribute to the development of effective drugs – something the world has been awaiting for decades.
Read more

Methods of preventing Alzheimer’s
Miia Kivipelto has shown that lifestyle changes can prevent memory decline. Now she is delving deeper into the risk factors for Alzheimer’s disease, and creating a new platform for clinical studies. The aim is to be able to tailor treatment methods that prevent and slow the progress of dementia.
Read more

An earlier and clearer picture of brain disease
During their lives millions of people suffer from Alzheimer’s, Parkinson’s or other degenerative diseases of the brain. By the time symptoms appear, the disease has progressed for many years. Wallenberg Clinical Scholar Oskar Hansson wants to use new tests to identify diseases earlier and understand them better.
Read more

How our memories are created
New technology enables scientists to film how neurons in the brain communicate and build networks. The high-definition images may reveal how memory and learning are initiated at the cell level. This knowledge may pave the way for new therapies for diseases such as Alzheimer’s.
Read more

New findings on smell can help Parkinson’s and Covid-19 patients
Great strides are now being made in what we know about our sense of smell. The recently discovered ability to measure signals from the olfactory bulb in the brain opens the way for new methods of identifying diseases. Loss of smell is linked to diseases such as Parkinson’s, and this symptom could be used to make a diagnosis up to ten years earlier than at present.
Read more

Organs-on-a-chip: revolutionizing medicine
The human body on a microchip may be the future of biomedicine. This project is focusing on developing an artificial model of the blood-brain barrier. The blood-brain barrier is essential, but its efficiency is also an obstacle when administering drugs to treat diseases such as Alzheimer’s and Parkinson’s.
Read more

Mimicking the brain on a microchip
Using electronic chip systems that mimic processes in the body’s organs researchers hope to develop drugs more efficiently. For exampel they want to see whether they can make a model of Alzheimer’s.
Read more

Slowing the progress of ALS
The research is focused on ALS but since evidence increasingly indicates links between ALS and other neurodegenerative diseases, the ALS team hopes their research will not only add to our understanding of ALS, but will also provide new general knowledge that can be translated to other diseases, including Parkinson’s and Alzheimer’s.
Read more

Protein atlas maps the way to new drugs
Mathias Uhlén is a driving force behind one of the largest research projects ever conducted in Sweden: mapping all proteins in the body. Rewards are now being reaped in the form of new biodrugs and diagnostic methods.
Read more