Since the turn of the millennium many of Knut and Alice Wallenberg Foundation’s strategic initiatives have helped to build up an extensive network for the furtherance of expertise in basic science in the Swedish scientific community and in Swedish industry, in fields such as life sciences, mathematics, data, AI and quantum technology.

Over a period of almost 20 years brick after brick has been added in the creation of two clusters: a life sciences network and a network in mathematics, data, AI and quantum technology, generating reciprocal synergies.

The goal is to ensure that Swedish academic and industrial research is at the forefront of the rapid developments taking place in the fields set to dominate societal development. 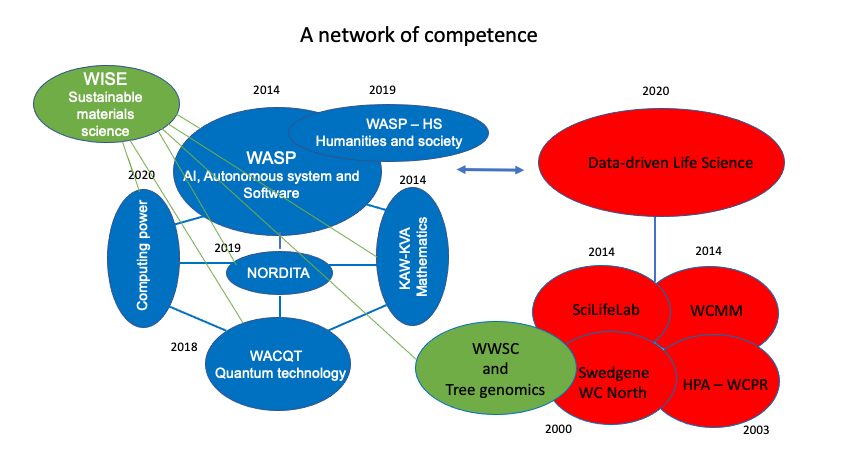 Life sciences is a broad field in which research findings primarily benefit the medical sector in the form of new drugs, diagnostic methods, prevention and therapy. Progress also benefits veterinary medicine, plant research and biotech, along with forestry and the food industry.

The Foundation’s initiative began in 2000, when two consortia were formed in the fields of functional genomics, genomics and bioinformatics: Wallenberg Consortium North (WCN), and Swegene. The Foundation’s investment in these consortia totaled almost SEK 1 billion. Their prime mission was to establish common technical platforms and resource centers for researchers, given that the equipment and other infrastructure required were very expensive. The project also involved the introduction of new approaches and forms of collaboration. This sowed the seeds for what were to become SciLifeLab and Wallenberg Center for Molecular Medicine (WCMM), and the high level of expertise in life sciences existing in Sweden today.

In 2003 Professor Mathias Uhlén began working on the Human Protein Atlas Project (HPA), which is mapping and imaging the 20,000 or so proteins present in the human body. The project has gone on to describe the location of individual proteins in the body. In total, HPA has received funding of close to SEK 1 billion from the Foundation. The atlas, which is an open database, has developed and become Wallenberg Center for Protein Research (WCPR) at KTH Royal Institute of Technology and Chalmers University of Technology, with the emphasis on biological molecules for medical applications.

The Foundation has over 20 years also invested in forest research via Wallenberg Wood Science Center, Umeå Plant Science Center, SciLifeLab and the program for increased forest production. The research spans a broad spectrum: from production of the world’s first whole-genome sequences for trees, and large-scale mapping of Sweden’s spruce and pine cultivar populations, to development of environmentally-friendly forest cultivation methods and new sustainable materials based on forest raw materials. In total, the Foundation will have invested SEK 900 million over a 20-year period.

"The Foundation’s strategic initiatives during the period include recruitment of 250 new research teams to Sweden and education for about 1,300 PhD students of which one third industrial PhD's."

In 2014 the Foundation and the Royal Swedish Academy of Sciences launched a joint mathematics initiative. Evolving mathematics is a foundation stone for many sciences, not least life sciences, AI and new technology. The Foundation has allocated SEK 650 million for the program to 2029.

The same year the Foundation earmarked SEK 600 million for the Wallenberg Clinical Scholars program with a view to boosting Swedish clinical research, this too in collaboration with the Royal Swedish Academy of Sciences.

2014 also saw the establishment of Wallenberg Centre for Molecular Medicine (WCMM) at the universities of Gothenburg, Lund, Umeå and Linköping, in collaboration with the respective health care regions. AstraZeneca is also involved in Gothenburg. The aim is to create the best conditions for world-leading molecular and traditional research, and foster next generation leaders in the academic world and health care sector. Some 90 experimental and clinical research leaders have been recruited to date. WCMM and SciLifeLab have also launched a joint national program for future research leaders in life sciences. Total funds of SEK 1.1 billion will be allocated to WCMM.

In 2014 the Foundation decided to provide substantial funding for SciLifeLab – a national research center for molecular biosciences. Knut and Alice Wallenberg Foundation has contributed approximately SEK 800 million, some of which has gone to build sequencing capacity, facilities for cryo-electron microscopy (cryo-EM) single-cell analysis and bioinformatics. SciLifeLab is also coordinating a number of Foundation initiatives, including its substantial funding of Covid-related research in 2020.

The same year a program was launched in the field of autonomous systems and software, expanded in 2017 to include AI – Wallenberg Artificial Intelligence, Autonomous Systems and Software Program (WASP). The goal is to recruit 80–100 new research teams, and educate 600 PhD students, where of at least 150 in industry. The idea is to establish an internationally excellent environment for research into autonomous systems, software, and AI. A total of SEK 4.2 billion has been allocated to the program.

Quantum research to the fore

In 2018 the next piece was added to the mathematics–data–AI network, in the form of Wallenberg Centre for Quantum Technology (WACQT). The object is to establish a long-term high level of expertise in Swedish academia and industry by attempting to build a 100-bit superconducting quantum computer. The Foundation has allocated SEK 1.2 billion to 2029.

The following year Nordita – the Nordic Institute for Theoretical Physics, headed by Frank Wilczek, Nobel laureate in Physics in 2004 and a professor at Stockholm University – was added to the cluster as a complement to WASP and WACQT. Nordita was awarded a grant of SEK 95 million to establish research teams in two new fields: quantum information and complex networks, both relevant to quantum computing, AI and “big data’’.
The same year the WASP program was joined by a sister program: WASP-HS. Researchers in the humanities and social sciences will be examining how development of new technology and AI impact society and human behavior. The program is receiving funding of SEK 660 million over ten years from Marianne and Marcus Wallenberg Foundation and Marcus and Amalia Wallenberg Foundation.

Two further major initiatives were seen in 2020 in their respective clusters/networks, yielding synergies for both.

Life sciences, along with other research fields, is becoming increasingly dependent on complex data. Never before has so much data been produced that may result in new, essential knowledge. The quantity of data, and its complexity, is growing exponentially. Partly in response to this trend, the Foundation, in collaboration with SciLifeLab and a WCMM program entitled Data-Driven Life Science (DDLS), has launched an initiative worth SEK 3.1 billion. The program’s goal is to build up broad expertise throughout Sweden to ensure that the future need for researchers in the field of data-driven life sciences, both in academia and in industry, is met. The research spans areas such as basic research for new drugs, spread of infection and infection biology, precision medicine and diagnostics, evolution and biodiversity, as well as cell and molecular biology. 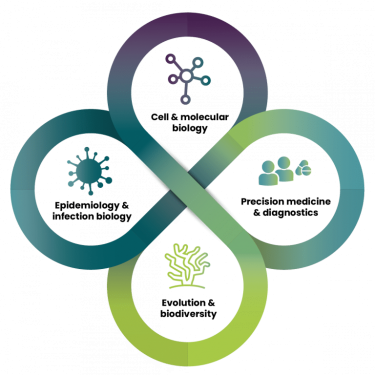 The overall plan is to recruit 39 top international researchers, establish a graduate school for 260 PhD students/industrial PhD’s, and announce 90 postdoc positions, along with 45 in industry.

The program is building on the Foundation’s earlier life science initiatives, and form a clear contact surface with the expertise established in mathematics, data and AI under the WASP and WACQT programs.

The second initiative, representing an investment of SEK 300 million, was development of a supercomputer for AI and machine learning at Linköping University. The researchers who will primarily be working on the supercomputer are involved in the research programs funded by the Foundation.

At the end of 2021, the research program Wallenberg Initiative Material Science for Sustainability (WISE) was launched. The aim of the program is to create the conditions for a sustainable society by researching next generation of ecofriendly materials and manufacturing processes. This will also facilitate better technology for energy systems of the future, and to combat pollution and toxic emissions.

The Foundation has allocated SEK 2.7 billion to the new research initiative during the period 2022 – 2033.

Reducing the environmental and climate footprint of the materials we use in our day-to-day lives and in industry is necessary to achieve the set climate and environmental goals within the UN Agenda 2030 and the Paris Agreement.

At the same time the Foundation allocated further funding of SEK 380 million to Wallenberg Wood Science Center (WWSC) for research on renewable materials from derived from the forest under the “New Materials from Trees for a Sustainable Future” program.

Some of the goals include replacing oil with wood in the manufacturing of plastics, creating stronger, fire-resistant materials, as well as new functional materials.

The expansion of the program, which is being conducted at Chalmers, KTH and Linköping University, means that six research leaders, 36 PhD students, and the same number of postdocs can be recruited, along with four visiting professors.

The program expansion brings the Foundation’s total investment in WWSC to SEK 1 billion.

A strategic approach for the benefit of Sweden

The by-laws of the Foundation laid down over a hundred years ago by Knut and Alice Wallenberg stipulate that it should promote scientific research and education conducted for the benefit of Sweden.

Knut and Alice Wallenberg Foundation has made numerous contributions to the process by which Sweden has become a leading life science nation. In total, the Foundation will have allocated just over SEK 6.2 billion to research in life sciences during the period 2015–2032. The Foundation has awarded grants for equipment, national infrastructure, along with project and individual grants, thereby playing a part in developments in this field for more than thirty years.

In the same way, the Foundation is contributing to the establishment and development of Sweden’s expertise in mathematics, data, AI and quantum technology, to the tune of SEK 6.1 billion between 2015 and 2029.

The Foundation’s initiatives during the period include recruitment of 250 new research teams to Sweden and education for about 1,300 PhD students.